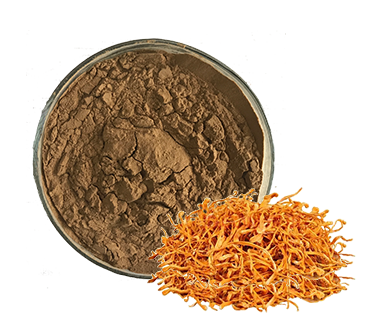 Studies have shown that Organic cordyceps extract has a good effect of lowering blood lipids. It also
affects the production of fat while lowering blood lipids. In 2008, research found that cordycepin can have certain protective effects on pancreatic cells under high glucose.
2. Antitumor effect
Organic cordyceps extract can inhibit the proliferation of a variety of tumor cells, improve its drug properties by studying its mechanism of action and structure-activity relationship, and then inhibit tumor cell proliferation and metastasis in many ways.
3. Neuroprotective and regulatory effects
Organic cordyceps extract has neuroprotective and regulatory effects and can effectively protect animal neurons. J study found that cordycepin reduces the increase of ROS and Ca2 + levels caused by glutamate, indicating that cordycepin may be a potential therapeutic agent for neuronal diseases and that cordycepin has important neuroprotection in hypoxia or ischemic injury effect.
4. Anti-inflammatory and antibacterial effect

Organic cordyceps extract has the ability to inhibit the reverse transcriptase activity of human immunodeficiency virus (type) and prevent its infectious effect. Cordycepin's anti-inflammatory effect is expected to play a role in clinical treatment in the future. The discovery of multiple anti-inflammatory mechanisms makes it possible to fight more inflammation problems.
5. Immune regulation and antioxidant effect The fast-paced life in today's society puts many people in a sub-healthy state. The immune regulation and antioxidant effects of cordyceps extract cordycepin can be used to regulate human metabolism and other issues.